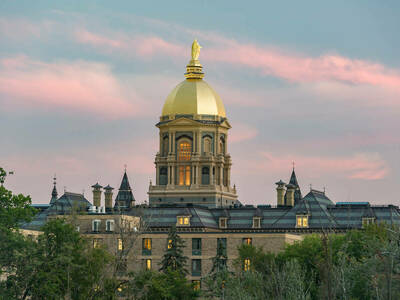 An interdisciplinary team of Notre Dame faculty is leading an effort with institutions in Ohio and Kentucky to replicate an experiential learning model for attracting and retaining diverse STEM workforces in Rust Belt cities through university-community partnerships that strengthen quality of life.

The three-year project, Replication of a Community-Engaged Educational Ecosystem Model in Rust Belt Cities, is supported by more than $2.5 million from the National Science Foundation’s Improving Undergraduate STEM Education program, $1.1 million of which is directed to Notre Dame.

Led by the College of Engineering’s Center for Civic Innovation — which uses technology and methods to address pressing issues in the South Bend/Elkhart area — the project also involves engineering and Department of Psychology faculty in the effort to understand how CCI’s model for community improvement projects functions in other cities under varying circumstances.

In the short-term, such research and collaboration projects seek to make life better for residents by addressing key issues of concern. In the long-term, the projects can foster strong connections between the students involved in them and the Rust Belt cities where they take place, spurring undergraduates to consider making their professional and personal homes there.

In both its short-term aim to improve the community and its long-term goal of building strong connections between students and Rust Belt cities, the effort strongly aligns with Catholic social teaching on seeking the common good for communities, Wood said.

“Rust Belt cities are the focus because they often struggle more with disinvestment — in neighborhoods, in people,” said Danielle Wood, CCI’s associate director for research and the principal investigator on the grant. “As a Catholic university, we are called to be in solidarity and participate in our community — to be good neighbors. And neighbors take care of each other. They work together. They look out for each other.”

“As a Catholic university, we are called to be in solidarity and participate in our community — to be good neighbors. And neighbors take care of each other. They work together. They look out for each other.”

‘We need to join forces more’

After their collaborative learning model of community engagement is applied by researchers at Youngstown State University and the University of Louisville and additional South Bend/Elkhart projects are implemented, Notre Dame will share a replicable model that provides STEM-based experiential learning opportunities to address an array of public challenges such as access to healthcare, affordable housing, and environmental sustainability.

The Notre Dame team aims to identify the best ways to create a network of community partners to identify projects; recruit students and train them in project management, team leadership, and design thinking; and promote diversity, equity and inclusion. Lapsley, a developmental psychologist, will study differences in student disposition and their sense of connection to the place in which they work and study — and how that differs based on variables in each location.

All of the civic partnerships in the grant will prioritize listening to the community before taking action and fostering spaces where students of all social and economic backgrounds are welcome. Potential initiatives could include environmental remediation projects, connecting public school students to STEM programs, or partnering with the City of South Bend on creating energy-efficient and affordable housing.

High schools and colleges throughout the South Bend, Youngstown, and Louisville regions will participate in the projects, exposing students to their academic peers and community members they wouldn’t otherwise meet — and, hopefully, forming connections that prompt them to consider staying in the Rust Belt.

“Creating that collaborative learning environment where educating youth and making positive community change is part of our ethos,” said Wood, who is also project director of the Notre Dame Global Adaptation Initiative (ND-GAIN). “It’s been happening, but more of a culture shift is needed.”

‘This flows from our faith’

So how does a psychologist get involved in a civic-minded effort led by engineers?

Two years ago, Lapsley went to a presentation Wood and Brockman were giving about their community work and partnerships — and what they were saying sounded very familiar.

Wood and Lapsley met the next day to continue the conversation, and the synergy was clear. University-led community partnerships provide students the autonomy they need to develop ideas on community-identified issues while also generating a sense of attachment to the communities they serve.

In psychology buzzwords, it gives the students “voice” and “choice.” A greater sense of purpose emerges, and students gain a heightened civic identity that means they’re more likely to vote and engage with their community.

“The work Dan does is highly relevant here,” Brockman said. “There are far more important connections between the College of Engineering and the College of Arts and Letters than people realize.”

Beyond the psychological component, the underlying mission resonates with Lapsley — as a Pittsburgh native and son of a steel worker, he knows what it’s like for a city to lose its industry and redefine itself through other careers and research in medicine and technology.

And the energy at the intersection of expertise, mission, and service makes Notre Dame the perfect place to be advancing such efforts.

“We should be using our science, our engineering, our theology, and philosophy to help people so they have the context to flourish, for regions to contribute to the well-being of individuals,” Lapsley said. “This flows from our faith, alleviates distress, and makes lives better for people.”