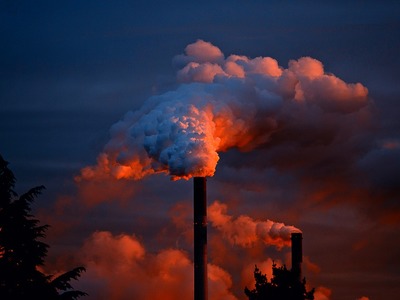 On Thursday, June 1st of 2017, President Trump pulled the United States out of the 2015 Paris Climate Accord that included 195 countries. This agreement was a global effort to battle climate change and keep the global surface temperature from rising above 1.5°C. Participation was largely voluntary. The United States’ exodus from this deal will make resolving the problem of climate change much more difficult, but not impossible. The U.S. may yet be able to positively change its impact on the environment through the determination of local leaders, the participation of private business, and the increasing role of adaptation.

Firstly, we must not downplay the importance of the United States pulling out of this agreement. According to the Union of Concerned Scientists, the U.S. produces 5490.63 million metric tons of carbon dioxide (CO2) annually from the consumption of energy [1]. This is second only to China in quantity. Additionally the U.S. has CO2 emissions of 17.62 metric tons per capita, which is the third highest behind Australia and Saudi Arabia. We are now one of three countries that do not participate in the agreement, accompanied only by Syria who didn’t join due to a massive civil war, and Nicaragua, who chose not to join because the agreement was not strong enough [2]. More important is the precedent we have set for other major economies like China and India, who now have an easier excuse for leaving the agreement in the wake of the U.S. exit. In short, North America is a major contributor to the global emissions problem, we are one of the only countries not helping to fix it, and we are setting a precedent for others to exit the agreement, too. This may all seem grim, but there is hope yet from non-federal sources.

The first sign of hope comes from the mayors of many major cities across the country who have come out saying that their municipalities will “adopt, honor, and uphold the commitments to the goals enshrined in the Paris Agreement.” [3] As of this article’s publication, there are 211 mayors who have agreed to this statement, and that number continues to grow [4]. The actions taken by these mayors are both symbolic and incredibly important. Cities are often the sources of major industry (and therefore major emissions) and one has to only-look at the origins of cities like Pittsburgh or Detroit to see it. This sign of hope does come with problems, though. These include the lack of accountability for these mayors and the constant cycling in of new mayors who may or may not agree with this pledge. But it is a sign of hope nonetheless. By vowing to uphold important aspects of the Paris deal, such as the decreases in emissions and increased funding for renewable energy, the global impact of the US can at least be marginally as effective as it would’ve been under the Paris Agreement, due to the actions of these local leaders.

The second beacon of hope for our global climate in the wake of the U.S. exit is the willingness by participation of private business to pick up the federal government’s slack. A survey led by the investment consultancy Mercer shows that the risks and uncertainty associated with climate change could pose losses of up to trillions of dollars in investments [5]. This means that private industry has a stake in mitigating these risks as they pose a higher threat to their profit margins. This, coupled with the pullback from the federal government, means that private business is very likely to improve their environmental standards. In a report from CNBC, President and CEO of Autodesk Foundation Lynelle Cameron stated that her company is already taking measures to prepare for the risks of climate change by powering the business with 100% renewable energy, and innovating towards an environmentally friendly future [6]. Given the lack of government leadership in the climate-arena, it is likely that private business will fill the void, which will be of major importance as the US attempts to recover from this recent Trump-blunder. 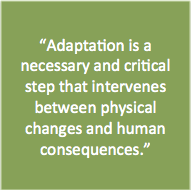 A third and final way the US can continue to work towards the Paris goals is through the continued increase in adaptation to our climate risks. Patrick M. Regan, Notre Dame Professor of Political Science & Associate Director of the Environmental Change Initiative, describes adaptation well when he states “Adaptation is a necessary and critical step that intervenes between physical changes and human consequences.”[7]Through increased adaptation, the U.S., and every country, can reduce their vulnerability to climate risks that are likely inevitable regardless of future mitigation efforts. Adaptation is vital to our response to climate change, and is therefore is a major factor in deciding how we should respond to this exit from the Paris agreement. Examples of adaptation can be as simple as preparing a local sewer system for increases in precipitation to prevent flooding or, as complex as engineering a massive flood-control barrier in Venice to battle rising sea levels. Adaptation is a process that local, regional, and national entities can undertake, which makes it a major tool in the ongoing battle against climate change.

Paris Goals Still Within Our Grasp

The action taken by President Trump to pullout of the Paris climate agreement does not bode well for the future of the country, globe and the society we live in. Yet, it is not the end of the line. As a nation, we can look to local leaders, such as those mayors who vow to uphold the Paris agreement. We can look to the leadership of private business, and to adaptation efforts taken in lieu of the federal government. We can #ActOnClimate.

[2] Gould, Rebecca Harrington and Skye. "The US Will Join Syria and Nicaragua as the Only Nations That Aren't Part of the Paris Agreement." Business Insider. 01 June 2017. Web. 06 June 2017.