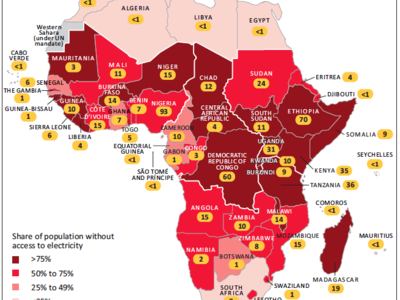 In May 2015, Pope Francis released an encyclical concerning sustainable development called “Laudato Si’.” In the encyclical, Pope Francis says, “The same mindset which stands in the way of making radical decisions to reverse the trend of global warming also stands in the way of achieving the goal of eliminating poverty. A more responsible overall approach is needed to deal with both problems: the reduction of pollution and the development of poorer countries and regions.” Some have claimed these two problems are counter to one another, and believe developing nations need cheap energy from coal to achieve rapid development.

Economically impoverished areas without access to reliable and safe energy are considered “energy poor,” and encompass over 1.2 billion people. People in energy poor areas do no have lights in the evening, have little or no access to radio, television or Internet, lack clean cooking facilities and do not have adequate access to health care. These factors and more make economic development nearly impossible. Over 95% of people in energy poverty live in sub-Saharan Africa or developing Asia.1  Of those, 84% are in rural areas.2

While coal is considered to be a cheap source of energy in the US and China, it is not a good solution for most of those who are living without energy. Expanding grid infrastructure in these areas is very expensive. For example, in India, every kilometer between a household and the nearest substation adds $0.02/kWh to the cost of electricity.3  Energy losses in distribution are also costly, because loss rates in both sub-Saharan Africa and India are three times the loss rates in the US and China.4  Additionally, most countries with high rates of energy in sub-Saharan Africa do not have coal reserves,5 increasing the price of coal energy even further.

Even if coal energy could cost-effectively electrify areas without energy access, the swift impacts of pollution and looming impacts of global warming to these nations are disproportionate and debilitating. ND-GAIN’s data scientists have found that nations affected most by poverty will require over a century to be able to handle climate change with the same effectiveness as the world’s wealthiest nations,6 and that a number of countries in Africa and Asia show a disproportionate risk to the effects of climate change with a combination of high vulnerability and low levels of readiness.7 More specifically, pollution and climate change directly threaten food security and health in these areas. Warming of 1.5°C-2°C will cause droughts and aridity in sub-Saharan Africa that will contribute to farmers losing 40-80% of cropland by the 2040’s.8  In 2014, air-sampling data revealed that fine particulate matter levels in New Delhi were twice as high as those in Beijing,9 a major health hazard, and a study published by the Proceedings of the National Academy of Scientists found that pollution in India was so severe that yields of rice and wheat were reduced by almost half.10

Renewable sources of energy can electrify rural areas now. As technology improves, the amount of energy PV and other renewable technologies can produce will increase and move rural areas from lights and cell phone charger to large appliances, allowing for more rapid economic development. While coal will continue to play a role in global electricity production until renewable sources become more productive and readily available, the expansion of coal-generated power is not an adequate solution for people in rural areas who need electricity today to support development and are most vulnerable to the effects of climate change. 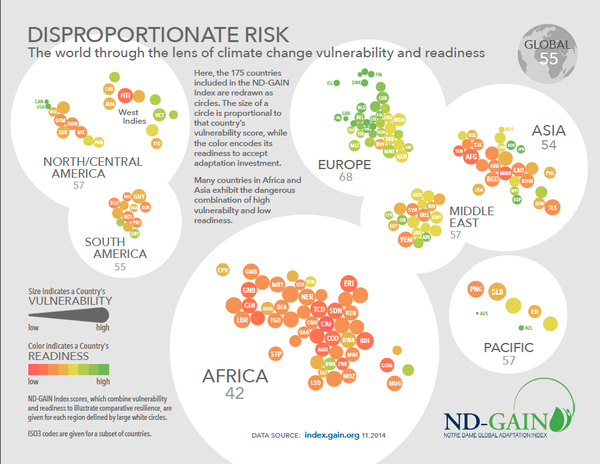 1 The Global Commission on the Economy and Climate. September 2014.

7 ND-GAIN. “Disproportionate Risk: The world through the lens of climate change vulnerability and readiness.”