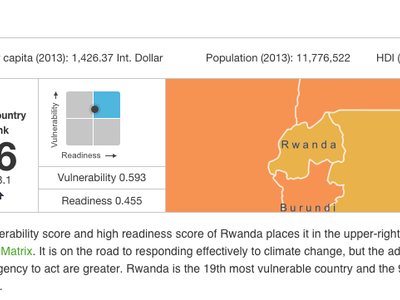 In the last few years, one country on ND-GAIN’s matrix has moved up in the readiness rankings faster than any other: Rwanda. This quick shift is mostly attributable to rapid increases in its economic readiness for the country, measured by the World Bank Doing Business Index. Increases in governance readiness, in particular, the progress in political stability and corruption control, have also had a large influence on Rwanda’s increasing readiness score.

Since the devastating genocide in 1994, Rwanda has seen enormous increases in GDP along with the improvement in public health. Many attribute Rwanda’s success to its President, Paul Kagame. Kagame has made gaining independence from foreign aid a top priority by creating a zero-tolerance corruption policy, investing heavily in education and minimizing barriers to foreign investment.

Between 2004 and 2010, health expenditures per capita increased two and a half timesi. In 2008, the Rwandan government set a goal to enroll 60% of students in vocational training by 2017. In 2009, education comprised the largest portion of federal spending. In general, better health and education increase an individual’s productivity and can lead to higher levels of income, supporting further access to better health and education.ii These cyclical effects allow the government leeway to tackle more adaptive challenges.

Additionally, in 2011, Visa and Rwanda started working on an electronic payment infrastructure for the country. By 2013, about 100,000 cards had been issued.iii All nine commercial banks in Rwanda now license Visa credit and debit cards and nearly 400 hotels, restaurants and retailers now accept the cards. While the infrastructure still needs work, Visa’s presence and brand recognition helps encourage tourism and support foreign investment. This, in turn, supports Rwanda’s ability to apply economic investment to adaptation.

While indicators from the World Bank Doing Business and the WGI have catapulted Rwanda through ND-GAIN’s readiness rankings, President Paul Kagame’s charismatic leadership and clear vision for his country have increased education, health and economic opportunity for his people. By investing in human capital, Kagame has allowed Rwanda’s citizens to tend to their most basic needs, making capital available for economic investment in readiness. Beyond backsliding into corruption, further economic development in Rwanda seems likely. One example in particular reflects reinvestment in the country caused by increased governance capacity, indicating that Rwanda’s readiness rankings are well earned.

Thanks in part to government stability, a well-enforced rule of law and the rare mountain gorillas of the Parc National des Volcans, tourism is currently the largest export service sector in Rwanda. Five percent of revenues from protected areas are reinvested into neighboring communities.iv As a result, 10 schools were opened, new water tanks were constructed to serve 1,250 people and trees, soil erosion controls and fencing were installed to limit access for illegal poachers. These expenditures reflect direct economic investment in resilience that is needed to support adaptations actions. If this reinvestment continues to happen throughout the country, Rwanda will have a wide adaptive capacity to address the challenges of climate change.