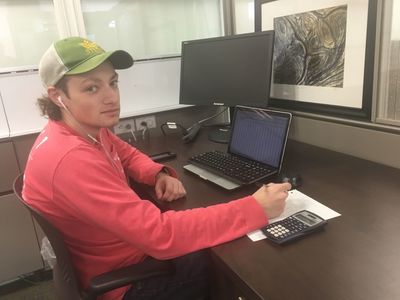 If there is a formula for how an internship should strike a balance between too little boss oversight and too much over-your-shoulder scrutiny, then Matt Lupo may have found it.

“It should be structured enough to tell you what to do,” said Lupo, of his internship with the Notre Dame Global Adaptation Initiative (ND-GAIN). “But not so structured that you’re told how to do it.”

Lupo and three fellow interns work to download the immense quantities of open-source data that will support the 40-plus indicators which undergird the ND-GAIN’s Urban Adaptation Assessment (UAA). When completed in June, the online tool will serve every U.S. city with a population above 100,000 (278 overall). As a dashboard with interactive maps and data, the UAA will help decision makers and citizens visualize how climate change may effect land use, transportation and water resources.

The UAA is also designed to shed light on the social inequities that exist within cities. Its data will reveal the distribution of adaptation resources, relative to various demographic groups. Cities can use this knowledge to improve infrastructure in ways that will better protect them against storms, droughts, floods and sea level rise.

The trouble is, Lupo works 10 hour per week and it can take hours to download data manually. For a self-starter like Lupo (Economics/Accounting ’19) that will never do. His solution? In data-MaGyver fashion, teach himself a new computer language – MATLAB – and thus greatly improve download times, and greatly impress his boss in the process.

“We hired Matt because of his data-savvy background,” said Kaitlin Harris, UAA project manager. “We knew he’d be great at calculating the probability for climate hazards, and finding and troubleshooting missing data from places like Alaska, Hawaii and Puerto Rico.

“But the way he taught himself to use MATLAB and Python script? That was amazing. He automated our download process, which saves us a heck of a lot of time. He's been so graceful about accepting new challenges, conquering them and moving onto the next thing.”

As with the other UAA interns, Lupo works from an unadorned desk in the Environmental Change Initiative (ND-ECI) office suite at Innovation Park. The interns often work remotely, and that, too, speaks to their level of accountability and budding professionalism. Lupo says the experience also allows him to use what he learns in his statistics classes. And not for a grade, but to help millions of Americans see how a changing climate will affect their lives and livelihood for years and decades to come.

“I enjoy the data,” Lupo said. “I get to study things like the 49 water withdrawal sites they have in Los Angeles. Or if in 2040, we’ll have wet a growing season. By using the SPI (standardized precipitation index) we can break forecasts down into three, six and 12 months increments.”

True to his economist roots, Lupo hopes the UAA will “inform the amount of money we spend, and the way it’s spent, to reduce our climate risks and improve resiliency.”

That said, as a Pewaukee, Wisconsin, native and Notre Dame undergrad he has already seen enough climate to convince him of one thing. “I’ve had it with this cold – 20 years is enough for me,” Lupo said. “After graduation, I’m going someplace warm.”