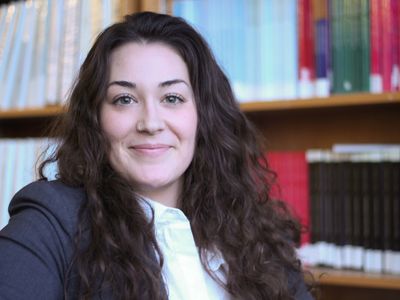 Kaitlin Harris serves as the Project Manager of the Urban Adaptation Assessment with the Notre Dame Global Adaptation Initiative (ND-GAIN). She recently visited Bonn, Germany, as a representative of an observer organization, in preparation for COP 23 Conference in November. She spoke about her experience during a Q&A session:

Q: Can you give us some background about your trip to Bonn for ND-GAIN?

A: Sure. I went there as a representative of ND-GAIN, which is considered an observer non-governmental organization (NGO), to attend the Adaptation Committee meeting. I know there’s a lot of acronyms, so let me explain it this way: the Adaptation Committee is an advisory body under the United Nations Framework Convention on Climate Change (UNFCCC). Adopted at the 1992 Rio Earth Summit, the Convention came into play in 1994 to decrease global carbon emissions, and today, is ratified by 197 countries. The Paris Agreement, a significant part of the Convention, aims to enhance the implementation by outlining mitigation, adaptation and financing measures. This year, from November 6-17, the U.N. will hold COP23 in Bonn. COP refers to the 23rd meeting of the ‘Conference of Parties’ who signed the UNFCCC treaty.

Q: Was your attendance affected by the fact that the Trump administration stated its plans to withdraw the United States from the Paris Agreement earlier this year?

Q: What is the Adaptation Committee, and what were they set to accomplish in Bonn?

A: The Committee is made up of 16 members from five of the U.N. regional groups, including individuals from Small Island Developing States, Least Developed Countries, Non-Annex I, and Annex I, for example. Most members are government officials from climate change or environmental programs around the world. They were in Bonn to develop recommendations about the technologies that developing nations can use to meet the Paris mandates.

Q: What did you and ND-GAIN hope to achieve by being there?

A: I was there on a scoping mission, to see how we could get more visibility with the Adaptation Committee. We want to get ND-GAIN’s Country Index on the Climate Change Secretariat’s radar, and become one of the top platforms that developing and developed countries can use to better inform and create adaption strategies for climate change. Long-term, we’d also like to have an ND-GAIN representative serve on the Adaptation Committee as well as have GAIN team members on the roster of experts.

Q: What response did you receive when you mentioned ND-GAIN?

A: Very positive – people would say, ‘Oh yes, I’ve heard of ND-GAIN and the Country Index. Can you tell me more about it?’ We made some great connections with several high-ranking people from countries who can use the Country Index. We have their contact info and will be following-up to continue to build bridges.

Q: When someone hears the term ‘observer’ they may think of a visitor who watches, but doesn’t participate. What was your experience as an observer actually like?

A: The four days of meetings I attended were held in the U.N. Campus building in Bonn, which is a beautiful, modern facility. I was one of about 30 observers, and they really welcomed and respected us for our expertise. During meetings, if an observer had an insight into a solution, we could raise our hand and the Secretariat would call on us to speak.

Q: How did you stay engaged and focused during four long days of U.N. meetings?

A: The meetings can be difficult and tedious. Because they’re drafting legal documents, they may spend hours wording a single sentence and building consensus across all 16 members. But it’s the grace of the Co-Chairs that makes the meetings run so well. They do a great job of accounting for cultural differences and language barriers while still staying on track. It’s about the people and process as much as the product.

For me, with my background in sustainable development and conflict resolution and negotiation, it was a fantastic learning experience. It made me see how important ND-GAIN can be in helping countries meet their goals. There’s also a strong ethical and moral component to this work. It’s not hypothetical when you’re talking about people in the horn of Africa who are dying because of drought. We can help save lives; we can help countries assess their needs, find out what works and implement solutions.

Originally published by Tom Springer at environmentalchange.nd.edu on October 19, 2017.