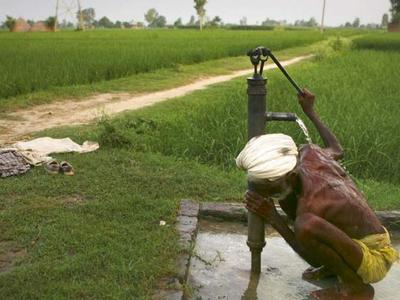 India’s weather pundits are starting to sweat over this year’s monsoon prospects and the country’s water equation. According to international water safety organisation Water Aid, India has the most rural people living without access to clean water — 63.4 million. The rural poor were highly vulnerable to the effects of extreme weather and climate change, the group said in a report.

India ranks in the top 38 per cent of countries worldwide most vulnerable to climate change and least ready to adapt, according to the Notre Dame Global Adaptation Index. Rural communities dependent on farming to make a living will struggle to grow food and feed livestock amid soaring temperatures, and women — typically responsible for collecting water — may have to walk even greater distances during prolonged dry seasons.India supports 15 per cent of the world’s population but possesses only four per cent of the world’s water resources. World Bank data shows that only 35 per cent of India’s agricultural land is irrigated — defined as the artificial application of water to land or soil. This means that 65 per cent of farming depends on rainfall.