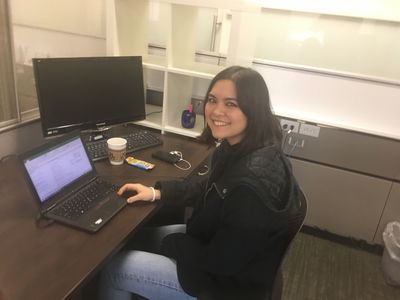 Although she’s fluent in five languages, it’s the wordless ways of the sea that often speak most clearly to Jacqueline “Jackie” Brebeck. And, have inspired what could be her life’s work.

“My Dad has this great relationship with the ocean, and he passed it onto me,” said Brebeck (’19 Accounting), who grew up in Taipei City, Taiwan, and Wauwatosa, Wisconsin. “I started scuba diving when I was 12. Every time we went to the beach, we’d pick up plastic and throw it away. I got this feeling that I should take care of the environment – and it’s never left me.”

Brebeck has pursued her passion in word and deed as an intern for the Notre Dame Global Adaptation Initiative (ND-GAIN). With three other interns, she’s helping to build an online tool known as the Urban Adaptation Assessment (UAA). When completed in June, the UAA will serve every U.S. city with a population above 100,000 (278 overall). As a platform with interactive maps and data, the UAA will help decision makers and citizens visualize how climate change may effect land use, transportation and water resources.

The UAA is also designed to shed light on the social inequities that exist within cities. Its data will reveal the distribution of adaptation resources, relative to various demographic groups. Cities can use this knowledge to improve infrastructure in ways that can better safeguard all residents from storms, droughts, floods and sea level rise.

In a project driven by big data, Brebeck supplies the context behind the numbers. Her concise explanations help mayors, planners, community leaders and citizens understand why the UAA’s 40 indicators matter. Consider this indicator regarding “the percentage of the population who are outdoor workers.” While it may seem more tangential than essential, it reflects the negative ways that climate change-induced heat events can effect a city’s long-term health.

“Those who work outdoors are vulnerable to heat stress, which can cause a decrease in productivity and induce health risks such as dehydration, health stroke and long-term damage to major organs … Climate change will increase both the intensity of heat exposure and the number of areas vulnerable to it.”

“Jackie’s a very good writer, and she provides the rationale and justification behind our indicators,” said Kaitlin Harris, UAA project manager. “She ensures that we’re on solid ground, and that our technical resource materials are comprehensive and understandable.”

Beyond that, Brebeck is the rare intern who can translate indicators into Mandarin Chinese for cities that need them: “I haven’t talked much about climate change in Chinese, so it’s taken some research to find that out,” she says.

It helps that Brebeck has an American father and a Chinese mother. She’s a dual U.S. and Taiwanese citizen, who lived in Wisconsin from the 1st through 3rd grade. After her mother grew tired of Midwestern winters, they returned to Taiwan where Brebeck finished high school – and learned Taiwanese, Chinese, German and Korean along the way. But she still spent summers in Wisconsin on her cousin’s farm, not far from Lake Michigan: “Nature is very personal to me. No matter what country I’m in, I’m happiest by water.”

As an accounting major with minors in sustainability and international development, Brebeck believes she’ll be well-positioned to help businesses protect the environment.

“The business world often has the most power, especially in countries where the government isn’t reliable,” she said. “Plus, so many of the large decisions made by companies begin with the accounting process. My knowledge will allow me to say, ‘I’ve looked at the financials and you actually can afford to this good thing for the environment -- and here’s why.’”

With the UAA, she’s creating a tool that will help Americans nationwide build a similar case for positive environmental change. “I’ve been surprised to learn how important this tool is going to be,” she said. “It gives people a lot of power. It will help cities make better decisions about climate change adaptation, and planning decisions for things such as emergency preparedness protocols, that can and will save lives.”