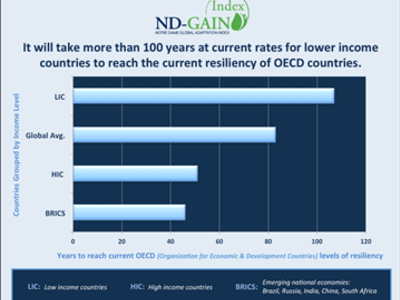 It will take the world’s poorest countries more than one century just to reach the level of climate change readiness that the richest countries already enjoy, according to data released Thursday (Dec. 12) by the 2013 University of Notre Dame Global Adaptation Index (ND-GAIN).

ND-GAIN is the world’s leading annual index that ranks more than 175 countries based on their vulnerability to climate change and their readiness to adapt to the droughts, superstorms and natural disasters that climate change can cause.

The latest version of Notre Dame’s annual index highlights huge disparities between the developed world and developing world when it comes to being prepared for the problems climate change is expected to cause in this century.

Some examples of the countries on this 100-year trajectory include Cambodia, Kenya and Haiti. “Given the recent typhoon in the Philippines, some people may be wondering where that island nation falls in terms of readiness,” said Associate Professor Nitesh Chawla, director of the Notre DameInterdisciplinary Center for Network Science and Applications. “According to the data, the Philippines are more than 40 years behind the most developed countries in climate readiness. While that’s better than the poorest countries, it shows that the Philippines still has a long way to go.”

While the ND-GAIN Index shows that countries around the world are becoming more resilient in the face of climate change, the data also show that this trend is not happening nearly fast enough — even for developed countries. “These data are sobering because they cast light on just how unprepared some of the most vulnerable nations really are,” Hellmann said. “But they also show that the most developed countries are not doing enough either, which raises serious public policy questions no matter how well-developed a national economy may be.”

This year’s data show that the ND-GAIN Index is more than just a ranking of countries. The index, which is “open source” and available to anyone with an Internet connection, contains crucial information for policymakers, the private sector and nonprofits. The index aims to unlock global adaptation solutions that save lives and improve livelihoods while strengthening market positions in the private sector and policy decisions in the public sector. It informs strategic, operational and reputational decisions regarding supply chains, capital projects and community engagements. “This year’s announcement shows that the index contains data that can clearly help decision-makers determine global, regional and national priorities,” Chawla said.

Under the United Nations-led climate talks, billions of dollars have been pledged to help the world adapt to climate change. But key questions remain on where and how that money should be spent. ND-GAIN is one tool that can help governments, nongovernmental organizations and the private sector better target those and other investments.

The 2013 Index was released on Thursday (Dec. 12) at the ND-GAIN Annual Meeting hosted by the Wilson Center, a nonpartisan global public policy institution. The ND-GAIN Annual Meeting serves as the premier gathering of domestic and international experts on climate change adaptation and is attended by leading figures from the government, nonprofit and private sectors.